Posted on August 18, 2016 by scotssciencescholars

In the weeks preceding my 18th birthday, everyone asked me what I would do with my first day of adulthood. When the day finally came, I had made my decision: I wanted to make bacteria glow.

Actually, I was required to do it, but because I’m a molecular biology nerd –  I was happy to do it! The lab consisted of several principles and procedures that require close attention to detail and relative precision. The purpose of the lab was to transform the genome of E. coli in order to produce GFP or green fluorescent protein. The transformation starts during DNA transcription by adding the pGLO plasmid into the bacterial genome to change the strand. A new strand of mRNA is produced and proceeds to the bacteria’s ribosome to be translated into a bacteria with the GFP present. In the presence of arabinose, the bacteria will utilize the protein, express the gene, and glow a bright green color when exposed to UV Rays. 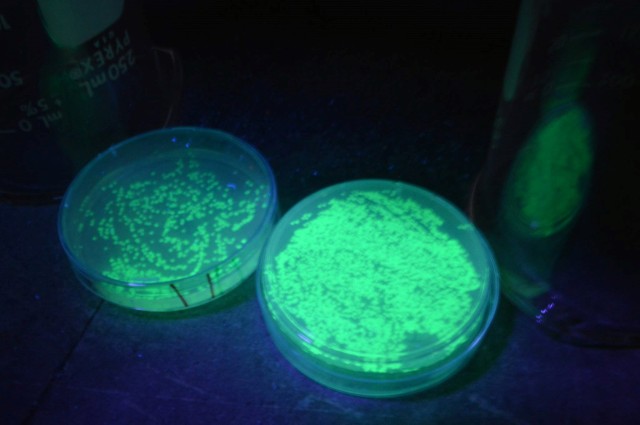 The transformed bacteria being shown in the UV light

The experiment required each group to prepare four different bacterial cultures containing different variables. The control dish was made of Luria Broth and an E. coli sample that did not contain the pGLO plasmid. The second and third dish were made up of the same substance plus an antibiotic called Ampicillin which would prevent bacterial growth. These plates separately had E. coli with and without the pGLO plasmid. The final plate had both substances from the previous cultures, as well as the monosaccharide arabinose.  The proposed and gained results were the following:

This lab was my favorite for two reasons. The first reason was that I was allowed to geek out about molecular biology for 3 hours and do one of my favorite labs from the high school. The second was that I got spend my birthday with some of the best people I have ever met. Without the 17 other Scots Science Scholars, the 2 wonderful professors, and the 5 amazing peer mentors, my 18th birthday would not have been as eventful or memorable.The S3 program gave me the best birthday present of all this year; it gave me a group of amazing and supportive friends.

Cameron Moore (the author), Tyler Lee, Alan Miramontes-Flores (peer mentor), and Ben Galloway pretend to like each other for a quick photo

This entry was posted in Uncategorized and tagged S3 2016. Bookmark the permalink.