Posted on September 22, 2016 by scotssciencescholars

Scots science Scholars and friends heard seven junior and senior math and computer science majors describe the work they did over the summer.  Besides hearing about the work itself, students received great advice on how to land an internship, and what kinds of skills and characteristics are valued in the workplace.

Sarah’s work at the Spallation Neutron Source through Oak Ridge Associated University’s HERE Program was to model, fabricate and assemble a neutron detector.  Sarah had never worked in CAD, but she taught herself in order to be able to do the job. In addition, much of her time was spent communicating her work to others, both in written and spoken form. She credited her physics courses for helping her to understand the work she was doing and she even encouraged students who want to work in science to learn a second language as well.

Evan presents his poster at the end of the summer.

Evan worked with the Toxicology and Hazard Assessment group.  This group helps to assess the risks associated with toxic chemicals in the environment.  While Evan worked on several projects, he talked in detail about a tool that helps assessors determine safe levels and determine the risk from a person’s likely exposure to radon.  Even though  Evan was hired as a programmer, he ended up learning a lot of chemistry in order to be able to code the needed tools.  He was especially grateful that he had already had a database class at Maryville College.  The experience culminated in a poster session where Evan was able to present his work to many of the ORNL scientists.

Tanner Curren continued an MC tradition by being the third computer science major to work in high performance computing at the Joint Institute for Computational Science, where he continued his work from last summer. Tanner help build a framework for parallel computing applications to assist scientists with existing models to do simulations more efficiently.  The group is planning to launch the application this year.  Tanner mentioned his classes in data structures and algorithm analysis as key to helping him complete the work.  The experience has led to strong professional connections for life after MC, including employment and graduate school.

Computer science and math  major Nabil Ahlhauser, and math majors Jordan Thomas,  John Compton and  Grace Puryear, all seniors, got a taste of corporate America. Nabil and Jordan worked at Fortune 500 companies while Johnathan and Grace completed interships at a division of one of the largest insurance companies in the country. 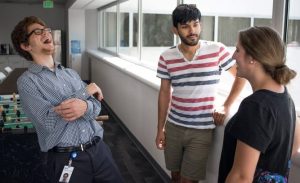 Nabil worked at IBM’s Innovation Lab, which makes products for IBM to use in-house.  His work included projects for accounts receivable, a customizable template for IBM work groups to use as a training tool, and an application that estimates time on task based on developers’ assessments.  Nabil used a number of technologies, including some that were new to him.  Perhaps the most important lesson he shared was that manager’s value independence very highly and hope that employees will be able to take basic instruction and turn it into what is needed.

John and Grace worked for Great West Casualty.  The internship they completed included opportunities to work in all the divisions of the company.  Interns also received training in business etiquette as well as company culture. Rotating through the divisions got Grace and John both excited about moving into the world of business analytics.  John encouraged students to do their research on a company before interviewing and make sure to build a network and make good connections while you are there.  Grace observed that hard work early in your career, including during your college years can give you an advantage when you start your career.   She encouraged students to find out what their strengths are and play on then rather than focusing too much on weaknesses.

Jordan Thomas worked for a third summer at HCA Healthcare, landing a spot in their insurance department working in health care indemnity.  While there, Jordan worked on many small projects, each taking about one or two days.  She also stressed the importance of independent work:  she would be given a task and expected to complete it on her own.  Her favorite project was working on analyzing the pros and cons of changing vendors.  She even had meetings with top executives of a nationally known financial company.  Like John,  Jordan emphasized the need to make and maintain connections and was even trained in resume writing and Linked In.

This event was a great way to start off the Scots Science Scholars event for the year.  Students  got valuable information on what it is like to work both in a research oriented setting and a corporate setting and great advice on navigating the professional world.  We’re looking forward to hearing from natural sciences students in October and November.

This entry was posted in Uncategorized. Bookmark the permalink.