Posted on August 1, 2016 by scotssciencescholars 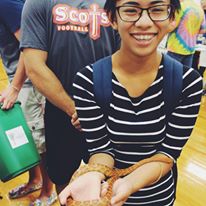 Hi, my name is Ginny Guisadio! I’m a neuroscience-biochemistry major from Morristown, TN and a part of the bicentennial class of 2019. When the year officially starts, I’ll be involved in various organizations, including the American Chemical Society, the Student Government Association, and the Student Programming Board. I’ll also be starting on a study of microaggressions within the athletic population with Dr. Kathie Shiba as a part of her Positive Psychology Lab.

When I’m not studying, my time is usually spent napping in various places around campus or watching Netflix when I probably should be studying. I have a strangely excellent memory for things that aren’t always relevant but are sort of interesting. It’s also quite likely that I’ll be the shortest person you’ll come across.

I look forward to adding more S3 kids to the clan and helping them through as much of college as I can. To the new Scots Science Scholars, feel free to laugh when the outdoors claims another victory against me!

This entry was posted in Uncategorized and tagged Peer mentor, S3 2016. Bookmark the permalink.